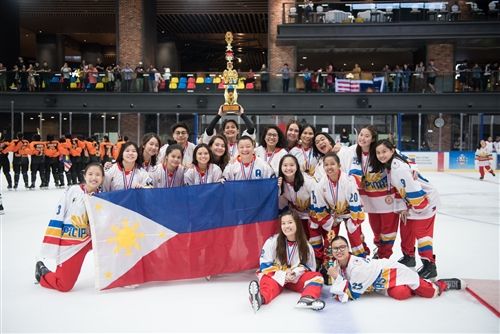 CUEVAS BRINGS Canadian experience and goal scoring to the Philippines

11/8/2018
Liz Montroy (Women's Hockey Life)
At the 2018 IIHF Women’s Challenge Cup of Asia (CCOA) Division I tournament in Malaysia, there was one player who lit up the scoreboard at a rate of 2.67 goals per game. Bianca Cuevas scored eight goals (and notched one assist) in three games for the Philippines’ national women’s hockey team. Her eight goals were more than any other female player in both of 2018’s CCOA and CCOA Division I tournaments.
The Philippines’ national women’s team made its IIHF debut at the 2017 CCOA, where Cuevas also demonstrated her scoring prowess, leading her team in points with five goals and four assists through six games.

The journey that Cuevas took to representing her country on the international stage and becoming a leading goal scorer took her from the Philippines to Canada.

(Read the full article on Women't Hockey Life online.)
Back