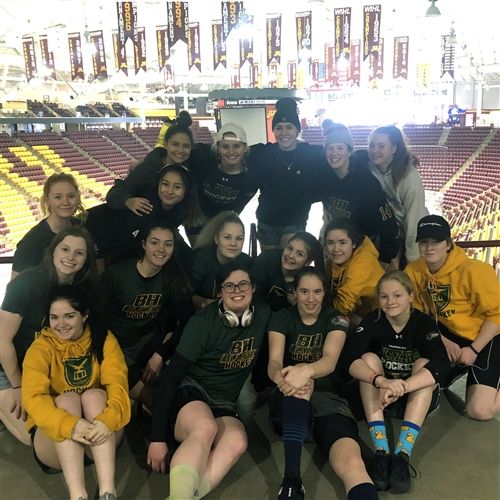 2/20/2019
By Jennifer Pawluk, Communications Specialist
On a Friday morning in mid-February, I have created a mobile workspace on the concourse of 3M Arena at Mariucci. On campus at University of Minnesota, home seems far away. I hear sounds, though, which transport me to the memories of my childhood. A frozen puck sliding across a snowy ice surface, a shrill whistle interrupting every so often, and then strong, assured voices calling out to one another as that puck moves from stick to stick again and again.

I have never played hockey, but I know the sport well from cheering on my younger siblings for more than 25 years. I have been a BH Blazers Hockey fan for about half that time, since my sister, Michelle, first donned the green and gold in 2007/08. Her teammates that season included Sarah Zacharias and Regan Boulton, who, as coaches of today's Blazers, are now my colleagues at Balmoral Hall School.

When they had asked me to join them for a bus trip to Minneapolis, MN for the final Junior Women's Hockey League (JWHL) U19 regular season series of 2018/19, I enthusiastically accepted their invitation.
We depart from Bell MTS Iceplex at 8 a.m. Thursday, Feb. 14. As soon as the bus starts moving, Head Coach Sarah Zacharias '08 greets each player (and colleague) individually with a Valentine's Day themed goodie bag, which immediately lifts everyone's spirits. We stop briefly to pick up Rebecca in her hometown of Morris, Man. Not long after, as an American border patrol agent scans our passports, Rebecca's likeness to Merida, from Disney's Brave, is remarked upon, and with that we continue on to Grand Forks, ND. A chemistry assignment from Ms Kirk seems to be a shared struggle for many as lunchtime approaches. We stop briefly at Subway and then carry on towards Minneapolis, alternating between homework, Netflix queues, and napping. In my case, in particular, I respond to the occasional email from colleagues who are operating as usual, which is a frustrating experience when I realize that I do not have all the files that I need. Thanks to Mr. Allinotte, all is well, and I turn my thoughts to the projects that I hope to complete upon my return to the office. Nearing dinnertime, a stop at the nearest Target provides a quintessential road trip experience — that is, the search for snacks (albeit, in this case, nutritious ones). After that, we pick up 22 preordered dinners from Applebee's, which we all savour at our home-away-from-home for the weekend, Days Hotel.

At breakfast in the morning, Kathryn reports back to her teammates that Chelsea K. is very unhappy with what she calls the hotel's "accent" pillows, a tale that reminds me of The Princess and The Pea. Seemingly unaffected by the quality of their sleep, given their performance versus the Ottawa Lady 67's that morning, the Blazers rally through 65 minutes of end-to-end hockey, ending their first game of the weekend in a 4-4 tie. A hearty postgame meal, lunch of their choice, is followed by downtime for studying and a highly anticipated shopping trip to Mall of America. A quiet Friday night includes dinner at the hotel and more downtime.

With another hour or so to sleep in, everyone arrives in the breakfast room Saturday morning fairly wide-eyed. Minor crisis averted when it is determined that the team bus has a flat tire; the hotel shuttle attendant saves the day (well, a timely warmup at least) by transporting us to the arena in groups of two. Although, Coach Zacharias and Assistant Coach Regan Boulton '09 take the opportunity to walk and manage a Starbucks run in the process. Game time arrives, and I set up a mobile workspace once again, taking a moment to reflect on the weekend so far. Highs and lows come and go. Boisterous cries of victory fade just as easily as purplish blue bruises from practice last week. A game can change in a matter of seconds, 43 to be exact, and all it takes is a burst of inspiration. The right play at the right time is a literal game changer, as the Blazers discover Saturday afternoon, trailing the Boston Shamrocks 2-3 with 1:59 remaining. An offensive face off provides the opportunity Coach Zacharias needed to pull her goaltender and send in a sixth skater. A crafty strategy, combined with a rousing pep talk, yields the tieing goal just eight seconds later and the game-winning goal 35 seconds after that. There is no time to celebrate, however, with thoughts already turning to their Saturday evening game against the New England Hockey Club. Lunch is a quiet affair, as, of course, rest is everyone's top priority. In my 25+ years of watching hockey, I think a 9 p.m. game time is the latest I have ever endured. I dread it, even though I plan to be sitting comfortably in the press box the whole time! As it turns out, I am tasked with picking up the team's postgame meal, and so I miss the third period altogether. A satisfying 6-0 win means that everyone sleeps soundly despite the late hour and early start Sunday morning.

They sleep so soundly that one room misses their reveille entirely. Within five minutes, though, the bus is fully boarded, and we arrive at the rink a few minutes before 8 a.m. The Ridley College Tigers are the Blazers final opponents of the weekend. The game promises to be an exciting one as the teams' earlier meetings this past season, both of them, ended in overtime wins for the Blazers. This time, however, the Tigers are the victors. The 2-3 loss brings the Blazers 18/19 regular season to a bittersweet end, as they finish second overall in JWHL standings nevertheless. With 30 points in 21 games, Balmoral Hall has never achieved such a feat since joining the league!

Postseason prep can wait until Tuesday, though, as the Blazers enjoy a hearty lunch at Panera Bread Co., a perennial favourite. While waiting for their orders, the Blazers are serenaded by a brave young man who stands on a chair to belt "Firework" at the top of his lungs over the jeers of his friends, who, it turns out, are an American Tier 1 Elite Hockey League team also having lunch at Panera just then. Still laughing as we board the bus, we begin the nearly five-hour drive to Grand Forks with homework in hand. Naps are taken intermittently, and by the time we arrive everyone appears energized by the prospect of stopping at Target before dinner. When Noodles & Co. callously abandons our online order, we cross the parking lot to McDonald's instead, a rare treat otherwise known as a cheat meal. Aidan thoughtfully collects everyone's grease-stained garbage before we reach the Canadian border, where we are met by patrol cars with lights flashing. Only a few questions later, we are directed onward to Customs, through which we pass without issue. For the hour-long drive to Winnipeg, we sing karaoke. When we return to Bell MTS Iceplex shortly after 9:30 p.m., with parents and caregivers awaiting our arrival, the Blazers quickly unload the bus. After such a busy weekend, all are glad to be home in time for Louis Riel Day.

When I return to my office on Tuesday morning, it is difficult to describe how inspired I feel. My notebook overflows with story ideas. For most adults, work-life balance is an ongoing challenge, but I have no doubt that these bright, determined student-athletes will develop the skills they need to rise on every such occasion.

After all, I will always remember the lessons on teamwork, on resiliency, on success that I learned in 108 hours with the BH Blazers.