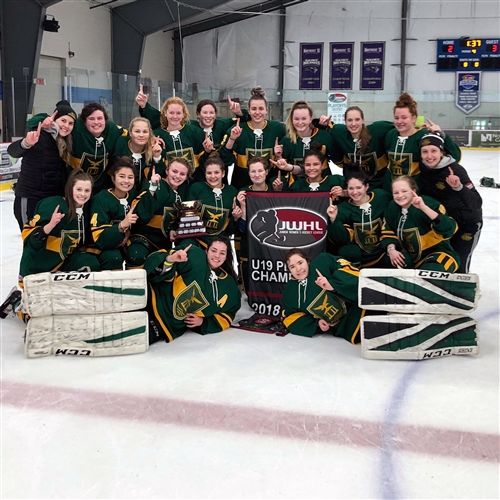 3/14/2019
By Jennifer Pawluk, Communications Specialist
In Burlington, VT last weekend, the Blazers won their first international championship since joining the highly regarded Junior Women's Hockey League (JWHL) in the Blazers' third season, 2008/09. Behind the bench were Coach Sarah Zacharias, Class of 2008, and Assistant Coach Regan Boulton '09. Winning the championship game in overtime versus North American Hockey Academy (NAHA) on March 10, the Blazers ended the 2018/19 season with a historic victory.

"All this began more than 200 days ago with an intense week of preseason training," says Zacharias.

"The night before our season started, I wrote down a list of five goals that I hoped we could accomplish as a team in the months ahead:
"By accomplishing all that and more, these 18 student-athletes made their mark on JWHL history, and they leave a legacy for us here at Balmoral Hall," Zacharias shares.