The Blazers Varsity Prep Hockey team was founded in 2006 – 2007 with their first victory coming in their first game against the Thunder Bay Queens. The Varsity Prep team has since enjoyed team and individual success with tournament wins being recorded at tournaments such as the Minnesota Thoroughbred, Kyle, Westman, and Saskatoon Tournaments. During the 2008 – 2009 season the Varsity Prep team joined the Junior Women’s Hockey League (JWHL) which is comprised of teams from Boston, Washington, Lake Placid, PEI, Stanstead, and Vancouver. In their first season in the league the Blazers won the West Division and finished as league finalists. During this same season the Varsity Prep hockey team recorded their 100th lifetime win in just three seasons.

The Blazers made history during the 2018-2019 season, capturing the JWHL Championship title for the first time in program history. In 21 league games, the Blazers went 14-5-2 finishing second in the league. On March 10th, 2019 the Blazers defeated defending champions, NAHA, 3-2 in OT.

Hockey For All Centre


Opened in August 2010, the Hockey For All Centre is a 177,000 square foot multipurpose, state-of-the-art facility that is open year round. It consists of four rinks, each with NHL regulation size ice surfaces (200′ x 85′). In addition, the facility boasts a dedicated Goalie training centre (45’ x 37’), 22 player dressing rooms, high performance fitness and training facilities, a full service pro shop, licensed restaurant and lounge, concession and vending facilities as well as conference facilities.
The Hockey For All Centre provides between 11,000 and 13,000 hours of ice annually which serves the minor hockey community, adult recreation leagues, tournaments, summer camps and casual rentals.

The Hockey For All Centre has been recognized as a Hockey Canada Centre of Excellence and was one of three venues that hosted the 2011 World Under 17 Hockey Challenge, a major international hockey tournament held by Hockey Canada each year.

GET TO KNOW THE COACHES 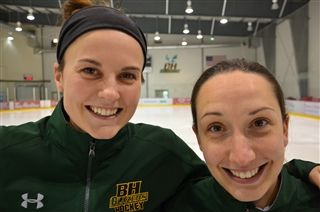 Sarah Zacharias is entering her 9th season with the Blazers and 6th as Director of Hockey and Head Coach of the Blazers. In 2019, Sarah led the Blazers to their first JWHL Championship in program history. Prior to taking the lead of the program, Sarah spent three seasons as the Blazers Assistant Coach and is also a former member of the Prep Program. After graduating from BH in 2008, Sarah took her academic and athletic abilities to play NCAA Division I hockey for the Niagara University Purple Eagles in the CHA’s.
After returning to Winnipeg, Sarah began working with the Winnipeg Jets Hockey Academy, a non-for-profit organization that teaches fundamental and development hockey to students ages 7-14. Sarah also joined the coaching staff of the MFMHL AAA Winnipeg Ice as the Assistant Coach. Sarah worked with the Ice for two seasons before coming back to her alma mater.
Sarah has worked with the U18 Team Manitoba for multiple seasons (2015,2016,2019). In 2015, Sarah helped guide the team to an impressive showing at the National tournament where they captured a silver medal in Huntsville, ON. Sarah was also on the bench as an Assistant Coach with the team in the 2019 Winter Canada Games in Red Deer, Alberta.

In 2019, Sarah was selected to be one of 30 women in Canada to represent Hockey Canada as part of the Women Master Coach Developer program. The We Are Coaches program is designed to increase the number of trained women coaches in Canada to provide women mentors and role models for young participants.

In 2021, Sarah was invited to join the NHLCA (National Hockey League Coaches Association) in their Female Coach Development Program. The intention of the program is to support the development women in several areas include networking, skills development, leadership strategies, communication tactics, and providing career advancement opportunities.

Regan Boulton, former alumnae of the BH Prep Program (2007-2009) and Team Manitoba (2009) is entering her 6th season as the Blazers Assistant Coach. After graduating from Balmoral Hall in 2009, Regan went on to play NCAA division I hockey for the Quinnipiac Bobcats in the ECAC (2009-2013). She spent four successful seasons with the bobcats, some of Regan’s accomplishments include; being selected for the ECAC second and third team all-stars in two consecutive seasons, New England all-star team, earning the most points by a defenseman in Quinnipiac history (77 points in 138 games), ECAC All-Academic team for three years, and captaining the Bobcats her senior year. Regan graduated with a Bachelor of Arts in Criminal Justice while also volunteering her time to various organizations throughout Hamden, CT.
After university, Regan was offered a professional hockey contract in Vienna, Austria where she spent two years playing for the Vienna Sabres in the Austrian League, Elite Women’s Hockey League (EWHL), and European Cup Champions tournaments. Over the course of two years, Regan scored 30 goals, 51 assists for a total of 81 points in 34 EWHL regular season games and ended up with a plus/minus of +117. Regan was also named an EWHL All-Star for 2013/14 and 2014/15. During her down time in Vienna, Regan was an English tutor and volunteer coach for the Vienna Tigers U-10 boys team.
Following her return home from Europe, Regan joined the coaching staff of the AAA Midget Yellowhead Chiefs of the MFMHL during the 2015-2016 season.  Regan helped lead the Chiefs to win the provincial title for the first time in program history.

In 2019, Regan was named an Assistant Coach of Team Manitoba at the National Women’s U18 Championships which took place in Morden, Manitoba. Shortly after, she was selected to be one of 30 women in Canada to represent Hockey Canada as part of the Women Master Coach Developer program. The We Are Coaches program is designed to increase the number of trained women coaches in Canada to provide women mentors and role models for young participants. Currently, the We Are Coaches program is delivering Coach 1, Coach 2, and Development 1 clinics to women across the country.

Our mission at Balmoral Hall School is to inspire girls’ imagination and the courage to excel, to reach, to lead, to care.

We are a nondenominational independent day and boarding school, educating students from Junior Nursery to Grade 12.